How to build a tiny home in six month’s

Here’s a great article we found that leads us to the laws and advice concerning building on the different zones of land in the Algarve.

Something that has changed over the last ten years but is still not a clear-cut process and one you should seek advice about before taking the plunge.

How a Couple Built Their Tiny House in Alentejo

This is a story of a millennial couple from Spain who bought an empty plot of land in the Alentejo region of southern Portugal and constructed a tiny house in 6 months.

Pepe Romero and Eugenia Diaz built the home from start to finish by hand in six months.

Now, they are selling a €399 guidebook on how they did it so others can follow in their footsteps!

Pepe and Eugenia, both 36, know a thing or two about making dramatic lifestyle changes.

The couple moved from their home country Spain to Los Angeles in 2012 after finishing university. Eugina had a background in medicine, however, after starting a handbag brand in 2014 which proved to be quite successful. As the brand grew Pepe decided to leave his job at an architectural office to help her manage the business.

Five years later, in 2019, the couple decided to close it down in order to change their lifestyle. Wanting to travel around Europe, they bought a second-hand cargo van. After hearing about the expensive prices to convert the van into a mobile traveller’s abode decided to do the conversion themselves.

After finishing the conversion, totally enjoying the experience, and travelling through Europe for a few months the idea came to mind to build the tiny house.

The Big Decision – Where to Built

Passing throughout the Alentejo countryside and realising the bargain price of land further fueled the desire.

After two weeks of searching properties in the Alentejo region, they came across the perfect setting and piece of land for sale in a small town with around 30 residents and took the plunge and bought a 1.2-acre plot.

Wanting a low-cost style of living, they had decided to be self-sufficient, and not too close to neighbours the land was ideal. Within 2 weeks they had signed the contract and moved on to the land in their camper van.

The couple drew up the design plans and built the entire cabin on their own with barely any external help. They started building in December 2020 using a makeshift workbench they had set up next to the project.

Problems from the Start

The weather became the first problem, being winter it was cold and quite rainy causing the ground to turn muddy and work conditions difficult.

With a stroke of luck, they became friends with the previous owners of the plot, who were kind enough to lend a helping hand at the start of the project.

“Having them around those first days helped a lot. It was great and a huge push, as those early days were the most complicated ones.”

Secondly, there was hardly any electricity, the couple only had 350 watts of solar panels installed on the roof of the van.

With much less sunlight during the winter months, the van’s solar panels were not sufficient to get through the whole day. Needing to charge the batteries of the power tools each time the sun came out. 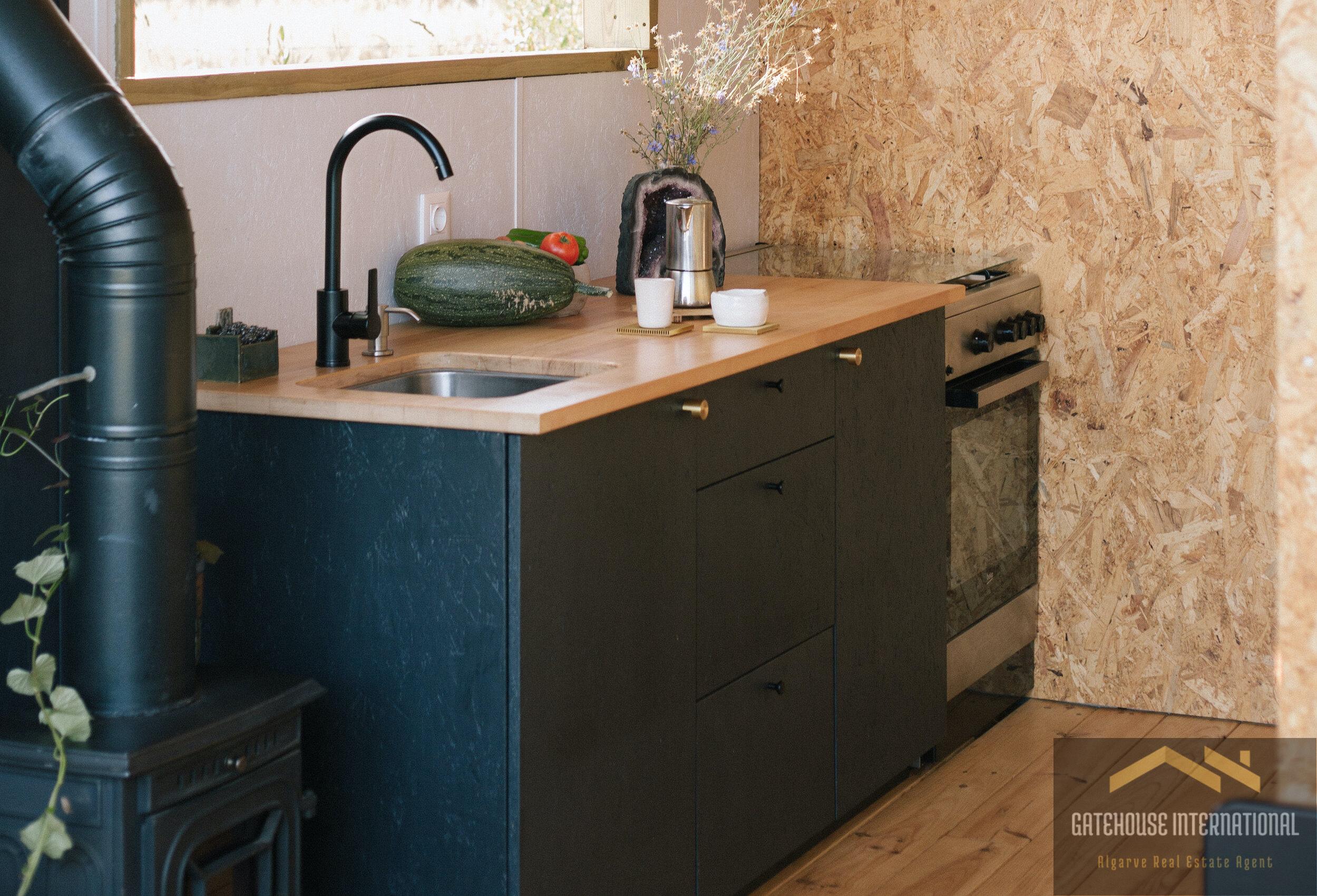 However, the couple persisted and ended up moving into the cabin in January 2021 before it was completed.

They comment that although the van was great for travelling in summer, it wasn’t the most comfortable to live in during the winter months.

“I think we only had half of the front door installed and no windows, but we taped the openings with plastic and started living in it anyway, We were definitely way out of our comfort zone,” Pepe comments.

It took Romero and Diaz just six months to complete the building of their 193-square-foot tiny house cabin.

They have been documenting their construction project on their YouTube channel Modern House Cabin, which has around 140k subscribers.

“Filming and editing all the videos for our YouTube channel did slow us a bit, I would say that we could build one in three to four months if we ever build another.” Pepe and Eugina state.

Home Comforts Lead to Another Decision

The now completed cabin has a basic rectangular layout, with a sleeping area on the mezzanine floor that can be accessed with a ladder.

Although it’s tiny, the house has everything they require, with a living space, sleeping area, kitchenette, and compost toilet, however, the shower is outdoors.

“Knowing that we did that, with our own hands, was extremely rewarding. I will carry that feeling with me forever,” Pepe says.

Having lived in the house for two years they have now decided they are going to build what they say will be their final home on the same land. At least this time they will have the comfort of their tiny home as a base for the new project.

If you are interested in following in Pepe and Eugina’s footsteps, we have many plots of land for sale in the Algarve suitable for this kind of project. If you contact one of the team at the Gatehouse International Algarve office we can discuss your ideas and give advice on the type of land you will need and lead you through the process of applying for permission the build.