Properties for sale in the Algarve – Algarve Real Estate

What is the Algarve’s Golden Triangle?

The Mystery of The Golden Triangle in the Algarve Explained

The Golden Triangle is a term used for the mini region that covers the resorts of Vale do Lobo and Quinta do Lago.

These are the two most exclusive and prestigious resorts in the Algarve region.

Known as The Beverly Hills of the Algarve they are both well known for their huge expansive villas with perfectly-manicured grass lawns, and high-class golf courses.

The triangle obviously needs a third point, but as there is no official definition, some local people say that the Algarve’s Golden Triangle’s third point should be Almancil while others dispute that it should be Vilamoura.

Vilamoura, with its beautiful marina, many 5-star hotels, and top-class golf courses, is far more luxurious than Almancil.

However, Almancil actually makes the most sense as the third point in the triangle. 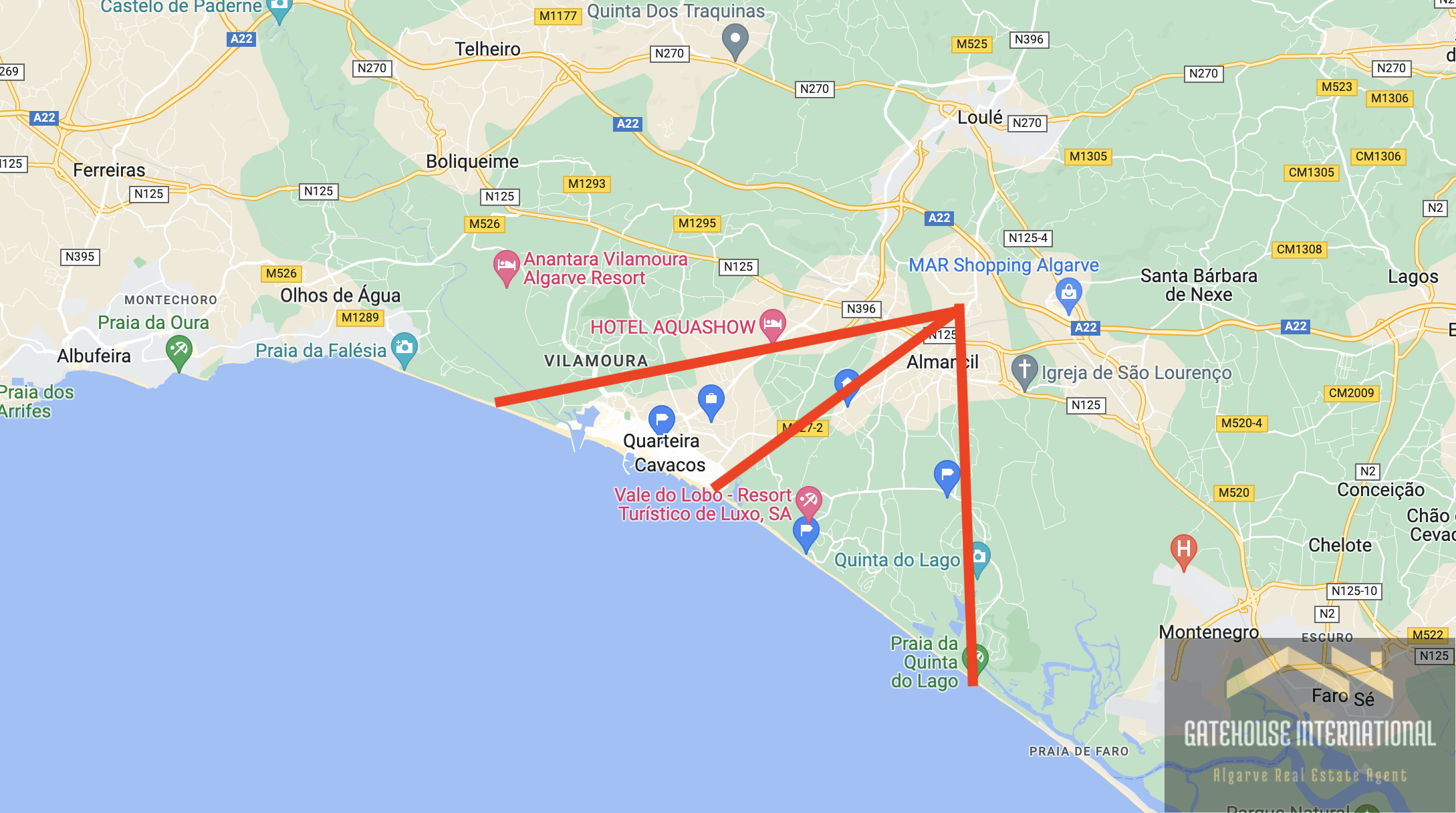 Using Almancil as the last piece of the triangle makes the area neater and only includes the luxurious resorts of Quinta do Lago and Vale do Lobo.

Whereas stretching the triangle out to include Vilamoura means encompassing a much bigger area. That would then include locations such as Quarteira.

Although a great typical Portuguese seaside-type town and is perfectly nice, it is certainly not in the same class as Vale do Lobo and Quinta do Lago.

Vale do Lobo One Point of the Golden Triangle

Vale do Lobo is one of the most cosmopolitan locations in the Algarve. Well known for its beautiful villas, luxury shopping, and the popular celebrities that frequent the resort.

Being very popular with golfers, with two 18-hole championship golf courses, it attracts players from all over the world.

Both the Vale do Lobo Royal and Ocean courses claim many visitors, however, the Royal course is definitely the more popular. This could be because of the 16th hole with its clifftop danger zone that is considered to be the most photographed golf hole in Europe.

Vale do Lobo also has a beautiful white sandy beach which is backed by deep red coloured cliffs.

With plenty of bars and restaurants to choose from on the resort many with beach and sea views.

There are also plenty of taxis or you can use the resort’s free bus service to get around the resort.

Property for sale in Vale do Lobo can be expensive but there is always the odd bargain to be had.

Quinta do Lago Another Point of the Golden Triangle

Quinta do Lago can be found just 5 minute drive from Vale do Lobo.

Quinta do Lago is probably the Algarve’s most impressive luxury and exclusive resort.

Reaching the beach by crossing a long wooden bridge a beach passing over the Ria Formosa natural park.

It also boasts a large lake with a man-made white sandy beach. A few restaurants and a watersports academy for some great activities.

As with Vale do Lobo golf is at the forefront and the resort has three top-class golf courses, namely the North, South, and Laranjal.

With plenty of places to play tennis, walk or ride bikes. The Ria Formosa nature reserve is near the beach that you can ride or walk along.

Properties in Quinta do Lago and Vale do Lobo are not cheap and often you will see properties listed for €10 million or more. However, there are still some bargain properties to be found.

A stay at one of the hotels in Quinta do Lago such as the 6-star Conrad will cost you around €200-600 per night or more in peak season.

So if luxury is what you are after, Quinta do Lago should definitely feature high on your bucket list.

Almancil The Tip of the Golden Triangle

Almancil like Quarteira is not of the same quality as the top three locations in the Golden Triangle and is really quite a simple Algarve town.

There’s not much to see in the town, the nearest attraction would be the Church of São Lourenço around 3 km away.

However, what the town lacks in terms of attractions, it makes up for with its location. There are plenty of bargain properties in Almancil.

Being just a 10-15 minute drive from the beaches of either Quinta do Lago or Vale do Lobo, not to mention the golf courses and high-class restaurants.

With property prices much lower than the two nearby principal locations, for some people, it makes Almancil the place to reside.

For some people, including us, the “Golden Triangle” should really now include Vilamoura.

If you’re looking for somewhere luxurious to live Vilamoura is definitely somewhere to consider.

The motto of Vilamoura is

“I wasn’t born here but its where I belong”

This rings true for many foreigners who have moved here.

The town is most famous for its beautiful and lively marina with many yachts and sailing boats moored in the bay.

Having one of the highest concentrations of 5-star hotels in the Algarve region, including the likes of the Crown Plaza, Four Seasons, Hilton and Anantara, it is one of the most popular Algarve resorts.

Vilamoura has the most golf courses of any of the Algarve resorts with six excellent options including the Old Course, Millenium, Pinhal, Laguna, Vila Sol and Victoria.

The marina and surrounding areas are loaded with golf-themed bars and many restaurants cater for groups.

With plenty of designer boutique shops, souvenir shops, supermarkets, restaurants, and cocktail bars they really do cater for everyone.

Vilamoura definitely has a lot more going on than either Vale do Lobo or Quinta do Lago and during the summer it really comes alive.

However, it is only a 15-20 minute drive from both Quinta do Lago and Vale do Lobo.

Our Conclusion to the Golden Triangle Debate

No matter what people say or think concerning the boundaries of the Golden Triangle to be quite honest does it really matter?

In Vilamoura, Quinta do Lago and Vale do Lobo we have three of the best resorts in Portugal if not Europe. All are within a short ride of each other making the area a top location to live.

If you choose Almancil or Quarteira to buy a property you are still the same distance away from all three resorts but will be paying much less and the cost of living is more affordable.

So the exact border of the Golden Triangle of the Algarve, just like the Bermuda Triangle, will always be a mystery.

But either way whichever of the resorts around the area you choose to live in you will have easy access to all the charms and beauty of the others.

3 Bed Apartment With Pool Vale do Lobo Golf is…